Porcine Stress Syndrome (PSS) and Rendement Napole (RN) are two genes that both have been correlated to poor pork quality. The negative effects of PSS and RN on meat can result in major economic losses for commercial hog producers. In 2019, Utah State University Extension randomly sampled DNA from 140 commercial hogs across the State. This study replicated a previous study that focused primarily on market show hogs. Results showed that only 7.14% of the commercial hogs tested positive as carriers. A series of workshops were held to disseminate information gained to producers on PSS and RN prevention.

The negative effects of positive carriers of Porcine Stress Syndrome (PSS) and Rendement Napole (RN) are detrimental to the pork industry. Genetic testing has become an important prevention piece for PSS and RN.

In 2016 a Utah State University Extension study randomly collected DNA samples from 150 market show hogs from thirteen counties in the State. The results showed that 49% of the hogs tested positive as carriers for PSS and/or RN, both of which could lead to poor meat quality (Dallin et al., 2017). These significant results lead researchers to question if similar findings might exist in the State’s commercial hog markets. Data from the Utah Agricultural Statistics and Utah Department of Agriculture and Food Annual Report shows that commercial hog production has economic relevance of $141,010,000 in the State with an average of 1,437,500 hogs being produced each year (Hilton and Gentillon, 2016). Poor quality or inedible pork could have immensely detrimental effects on the Utah pork agricultural economy.

Porcine stress syndrome (PSS), which springs from the Halothane (HAL) gene, is an inherited neuromuscular disorder in pigs that is triggered by stressful situations, such as exercise, fighting, marketing, vaccination, castration, parturition, and hot weather, etc. The symptoms exhibited by pigs experiencing PSS include muscle and tail tremors, labored and irregular breathing, blanching and reddening of the skin, rapid rise in body temperature, collapse, muscle rigidity and eventual death.(Stradler and Conaster, retrieved 2015). Rendement Napole (RN) gene is found to cause low ultimate pH and water holding capacity (WHC) in pork, and occurs mainly in Hampshire purebred and Hampshire cross populations. Low water holding capacity results in poor quality meat which is referred to as Pale Soft Exudative (PSE) grade meat and causes dry meat with low palatability when cooked. There are two possible alleles for the RN gene, one dominant mutant allele (RN-) and one recessive normal allele (rn+). Unlike the porcine stress syndrome (PSS), the RN- gene appears completely dominant (Du, 2004).

This article will review our 2019 findings from 140 sampled commercial hogs that were randomly selected from across the State of Utah. Results and educational workshops from this study will afford producers the opportunity to learn about the significance of these genetic identifiers and help with PSS and RN prevention in their herds.

A total of 157 samples were collected at random from hogs throughout the State of Utah in four predominant counties where commercial hog production is prevalent. County agents were mailed sample cards with instructions on how to collect hairs to be tested from the tails of swine. Tail hairs were pulled from each of the sampled hogs using pliers or a similar tool; they were then placed in a hair sample collection card to be sent in for testing. Of the 157 collected samples, 140 were randomly selected for testing. A total of $8,400.00 dollars ($60/hog) was spent on testing for Porcine Stress Syndrome (PSS) and Rendement Napole (RN). Genetic testing was performed by Geneseek, a Neogen Corporation.

Findings were then presented to extension faculty, hog producers across the state, and at National agricultural meetings.

Of the 140 samples that were tested, approximately 7.14% of the pigs had a genetic defect that could lead to poor meat quality, or other issues. Findings for the total sample are found in Table 1. 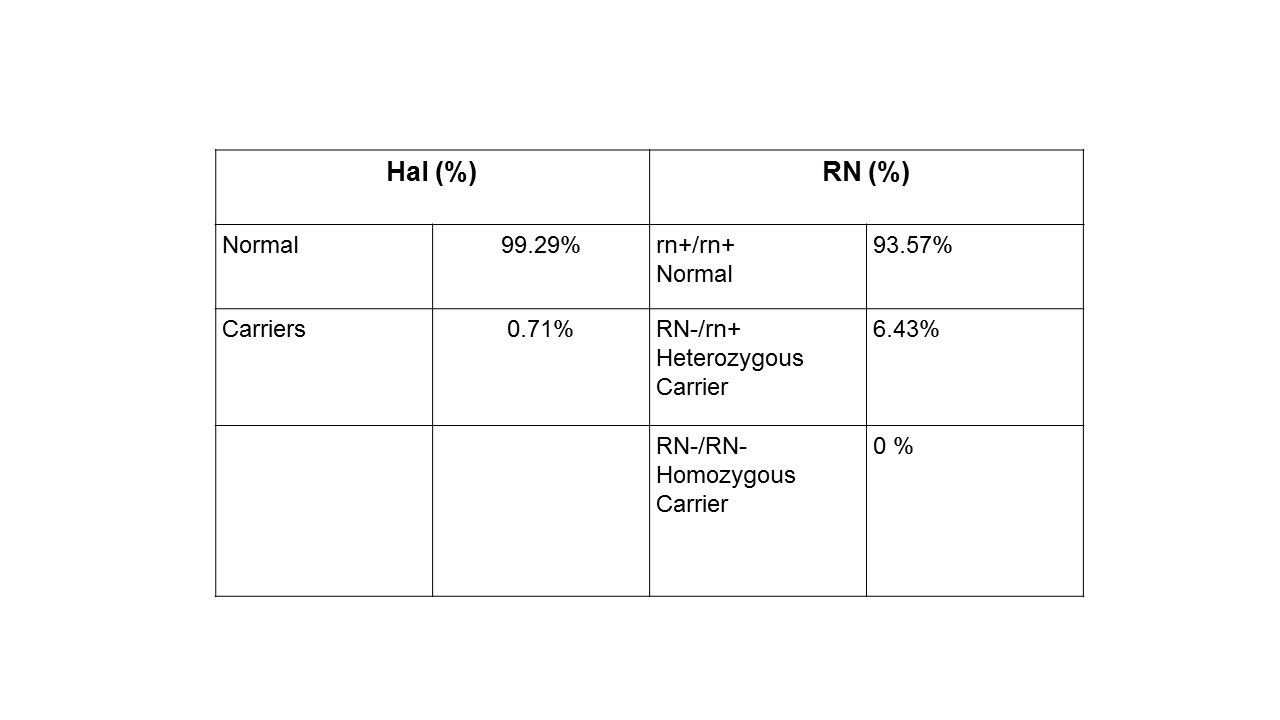 Findings that only a small percentage of commercial hogs were positive carriers, showcases that results are not alarming, but that there is still a small need for improvement.

To showcase the significance between groups we used a statistical hypothesis test comparing population proportions between the commercial hog group and the market hog group. Results were as follows:

H0 = No difference in the amount of hogs who carry the HAL gene between commercial and market show hog populations.

-Test at a 1% significant level

H0 = No difference in the amount of hogs who carry the rendement napole gene between commercial and market show hog populations.

-Test at a 1% significant level

The results of this study also show the significant need for porcine genetic information as a whole. It is clear that the problem lies within the market show hog genetic population, but could become a relevant problem in the commercial hog industry if not watched carefully by producers.

Unlike the porcine stress syndrome (PSS), the RN- gene appears completely dominant. This dominance implies that a copy of the RN- gene inherited from even just one parent can cause poor meat quality (Du, 2004). Eliminating the RN gene from production genetics is a must to ensure quality pork production.

Some recessive genes can be additive, and such is the case with PSS and RN. Research has found that the detrimental effects on pork quality are amplified in pigs with both the PSS and RN gene. Pigs with both genes can have even poorer meat quality than pigs with one gene or the other (Hamilton et al., 2000). While this was the case with many in the 2016 market show hog study, it was interesting to note that no commercial market hogs in the research study exhibited additive genes.

At the cost of $60 per PSS and RN genetic test, it is not economically viable for producers in large scale production to test all of their sows. It is recommended by the research team that producers should utilize genetic testing on boars utilized to reduce the chance of produced offspring carrying the HAL or RN gene. Currently some boar stud services are performing genetic testing on their sires before collecting and selling their semen. These results are available for producers. It is recommended that producers select normal for PSS and normal for RN (rn+/rn+). These boars with the normal genetic indicator are deemed homozygous for the normal gene and will not pass along the negative traits correlated to poor meat quality. Overall, providing preventative genetic testing should correlate with a greater positive consumer response.

State-wide workshops were conducted to educate Extension professionals and market hog producers on research findings. Each workshop was well attended, 93% of all participants expressed that information provided was relevant and timely. Participants noted that they learned more about genetic testing and how it could help their operation. From evaluation results it was clear the research and information provided were effective for hog producers and agricultural professionals in Utah. This applied research is hoped to assist in being preventative and minimizing the economic losses caused by the HAL and RN gene for Utah pork producers.