A four-year study was undertaken to observe the effects of fiddlehead harvesting on frond production of the ostrich fern Matteuccia struthiopteris (L.) Todaro. Ostrich fern crowns in a natural setting were used, with harvest methods that approximate the habits of traditional harvesters. Crowns with fiddleheads that were 100% removed in a one-time picking suffered significant decline in the number of fiddleheads produced over the four subsequent years, or in some cases were killed outright. Crowns that had only 50% of the fiddleheads removed in a one-time picking produced fewer fiddleheads in subsequent years, and were similar to the control crowns from which no fiddleheads had been harvested. This study suggests that harvesting up to 50% of the fiddleheads of a given crown, with no subsequent harvest in the same year, is more sustainable than completely harvesting crowns and completely harvesting crowns has the potential to weaken or eradicate ostrich fern colonies.

Fiddleheads, the tightly coiled, immature sterile fronds of the ostrich fern, are a perennial spring edible in the New England states and Eastern Canadian provinces (von Aderkas, 1984). They are marketed at farmer’s markets, supermarkets, and roadside stands; air-shipped fresh; canned as pickles; frozen commercially; and have for generations been enthusiastically harvested by families for personal consumption (von Aderkas, 1984). In Maine, fiddleheads are harvested almost entirely from wild stands of ferns rather than cultivated plots, and can be an important source of seasonal income to the harvesters (D. Fuller, unpublished observations). Ostrich fern has wide distribution in North America. They are found in 23 states, from northern Maine, stretching across the northern United States to North Dakota and as far south as Virginia. These ferns also occur in Alaska and in every Canadian province. (USDA NRCS, 2020).

Beyond their economic value, fiddleheads have a significant cultural importance. Native Americans were the first harvesters of fiddleheads. Speck (1940) noted that young Penobscot people liked to gather fiddleheads by canoe, and the fiddlehead is still central to their culture. Members of the Maliseet Tobique First Nation community in New Brunswick named their school “Mah-sos,” the Maliseet word for fiddlehead. The double-curve motif that has been used in the artwork of northeastern Native Americans for many generations Speck, (1914), is reminiscent of the uncurling fiddlehead. This study was undertaken to start establishing guidelines for long-term sustainable fiddlehead harvest practices.

Previous fiddlehead harvest studies have been conducted on plants that had been dug and transplanted for observation and received fertilizer inputs (Dykeman, 1985); or, in two cases, involved only a one-year harvest (Bergeron and Lapointe, 2001; Gabrielson,1964). The objective of this study was to determine the effect of fiddlehead harvest rates (half vs. complete harvesting) on long-term ostrich fern viability in a natural setting.

The ostrich fern crowns chosen for study were in a naturalized stand established in 1987 in Franklin County, Maine and subsequently spread naturally. This controlled, private, naturalized site was free from typical, heavy harvest pressure. The landowner has occasionally harvested fiddleheads from the research area over the years prior to the study.

This trial documented the effect of removal of all fiddlehead fronds versus half of the fiddlehead fronds over three years on the number of stems subsequently produced. The effects of the previous three harvests were observed during the fourth year. The data can help formulate harvest protocols to ensure the sustainability of fiddlehead harvesting.

The Treatment-2 crowns underwent harvest of 50 percent of the emerged fiddleheads from each crown. During the first year of the trial, in the event of an odd number of fiddleheads, we rounded up from 50%, harvesting four fiddleheads from a crown containing seven, for example. In subsequent years we rounded down from 50%, (e.g., harvesting three fiddleheads from a crown with seven). The Treatment-3 crowns had 100% of the fiddleheads harvested. It should be noted that there were no subsequent same-year harvests in either treatment, unlike wild stands that might experience multiple harvests by the same or different individuals in one season as the fiddleheads continue to emerge, as reported by Gabrielson (1964). Means with error bars appear in Figure. 1

Statistical analysis indicated a significant differences among treatments (p=0.0393), a highly significant effect according to treatment year (p<0.0001), and a highly significant treatment-by-year interaction (p=0.0044).  During the first year, the Treatment 3, in which all of the crowns were harvested, produced little effect on numbers of fiddleheads produced. But as harvesting continued in years two and three, the number of emerging stems decreased. By year four, after three years of harvest, the Treatment-3 plants had sustained a drastic decline in crown vigor, with the mean number of fiddleheads per crown declining from 5.1 to 1.4 by the fourth year, and mortality of 50 percent of the crowns (Table 1). In Treatment 2, harvesting half of the fiddleheads from each crown resulted in a decline from six fiddleheads per crown to 4.7 per crown over the period of the study. The control group averaged the same number of fiddleheads per crown each year over the four-year experiment. 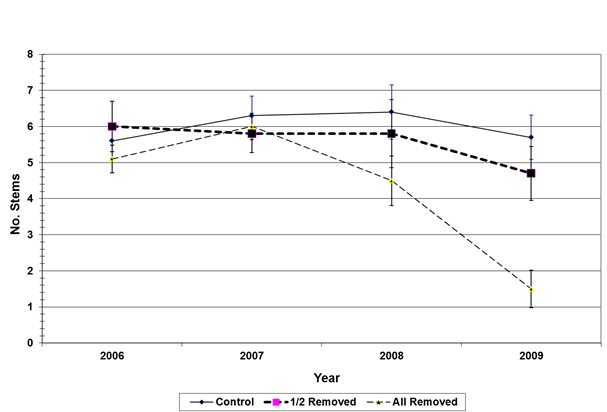 Interest in fiddleheads appears to be on the rise as consumers become more interested in local, natural and wild foods (D. Fuller, personal observation). Figures on the total pounds of fiddleheads wild-harvested in Maine are not available, as this harvest is not monitored, and recommendations for harvest have not been established. Up until now, little has been known about the effect on ostrich fern crowns of repeated fiddlehead harvesting, especially in those populations that are well known and annually harvested. A Maine landowner who has observed heavy annual harvesting on her property by other individuals has noted a severe decline in fiddlehead numbers and as a result, has closed the harvest areas (T. Berry, landowner, personal communication).

Further research with wild populations is needed to observe the effects of fiddlehead removal on ostrich fern crowns, including larger crowns with higher numbers of fiddleheads than those in this study. Another measurement to consider would be the diameter of individual fiddleheads over time to assess crown vigor after harvesting.